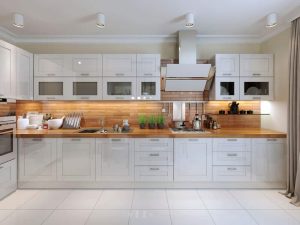 Kitchen equipment can be said to be a small hand-held tool that is commonly used in Kitchen. These items can basically be used for every task in the kitchen. Various equipment is built for different tasks such as blending, heating food, grinding, baking, etc.

A well-equipped kitchen is the ultimate goal that everyone would love to have. Generally, for a kitchen to be complete, there are several tools and equipment that must be in there.

Some Of The Most Common Things You Would Expect To Find In The Kitchen Include:

What is in the item list of utensils (tableware)?

A utensil is any tool that you can hold in your hand and use around the kitchen. They usually include:

All these are referred to as the utensils because of their portability. That is we can hold them using our hands in the kitchen and use them.

Another category of utensils available in our kitchens includes those items that we feed on such as:

These are classified as utensils as they can simply be held by a hand and used as well. They, however, are used outside the kitchen environment, which is back in the dining room.

What Is Cutlery And What Does It Consist Of?

This is the almost second-biggest category of the kitchen equipment. They are those items commonly used in the cutting of the food. They belong to the category of utensils, but autonomous in their own. Some of the items included in this category are:

All the different sets of knives such as;

Basically, there is no greater difference between utensils and cutlery. In most parts of the world, these two words are used interchangeably. However, where there is a proper practice of the English language, there is a difference in meaning between the two words.

You should therefore not get surprised when someone refers to the utensils as cutlery and cutlery as utensils. The meaning in the definition is not the same though.

Are Cooking Pans Classified As Part Of The Kitchen Equipment?

Pans are the most important equipment in the kitchen, such that if you do not have some in your kitchen, you won’t do anything meaningful.

Can we classify cookers as part of kitchen tools and equipment?

Are refrigerators parts of the kitchen tools? The answer is definitely yes. This is so because not all foods bought are meant to be cooked as a single meal. For example, if you buy 2 kilograms of meat and you only want to consume a quarter kilo for a single meal, you will definitely need a safe cool place to store the extra piece that you do not need at the moment.

However, it is important to bear in your mind that it is not healthy to store some kinds of fruits in the refrigerators, as it tends to kill the enzymes in the fruits. Once they are deactivated, the fruit becomes less healthy, or even harmful to consume. You can, however, regulate the temperature and they can cope well.

Can we classify kitchen taps, faucets, and sinks as part of the equipment?

This could be a complicated question. It may be hard to classify them as kitchen equipment but these are things that one cannot miss in any kitchen. They form an integral part of the kitchen. Their main aim is the supply of water for use in cooking and cleanliness. There are some classifications of these taps. The common ones are:

Also, some of the mixer taps are fitted with spray functions. They are therefore multi-functional or multi-user taps.

In conclusion, therefore, a complete kitchen, or a fully furnished kitchen is very diverse. One would expect to find an array of tools and equipment. It may not be possible to have each and every item as listed above, but it would be best to maximize the number of items available.

Most of the kitchen equipment is complementary to one another while others can be used in place of another, hence one may not have everything needed in a kitchen but will still function as normal, while another kitchen could be fully packed or equipped but still not utilize them fully.

10 Must Have Power Tools Everyone Should Have!

Robert Patrick
Robert Patrick is the Chief Editor of Tools Adventure.He spent around 25 years in the construction and woodworking industry as a professional worker.Based on his experiences with the different type of tools; he is sharing his opinion about various tools so that a beginner can get started right away.Happy reading!