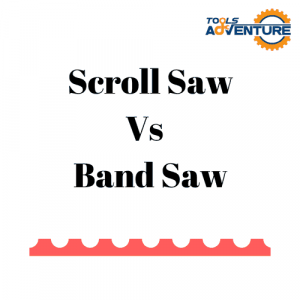 If you love to curve, cut, or chisel your wood pieces accurately, you will need a band saw or scroll saw. However, if you have limited knowledge about woodworking you may have a hard time understanding what actually to go for, when and why. In short, you won’t have the ideal the difference between Scroll saw vs. Band Saw.

Thankfully, we are here to help. In this post, we will give you simple tips that will help you to easily pick the difference and actually know what to go for depending on what you are looking to work on. Let’s hit the road and see the choice.

Scroll Saw vs Band Saw: What You Should Know

Let us take a cursory look on these two tools so that we can easily understand how they operate and the probable differences and similarities between them.

The scroll saw has an extremely narrow blade. This blade allows this tool to produce extra thin kerf. Such a kerf allows the pieces you are working on to fit back together as if they weren’t cut apart, to begin with.

Scroll saw also excels at giving detailed and accurate cuts when producing marquetry and inlays such as in tight curves like clocks, artworks, jigsaws, and puzzles among others. It will easily cut pinhead designs too.

Another reason to choose a scroll saw is when cutting cutouts in the middle part of a wooden design for instance if engraving landscapes on wooden surfaces. This is because scroll saw also has a blade that can be easily detached and later on reattached into the saw.

Because the scroll saw’s blade is extra thin and the superior end isn’t held in position by intricate machinery, you can easily unlock the blade and consequently thread it through the drilled hole before locking it back and moving on to make your favorite cutouts.

The band saw, on the other hand, is the best all-around tool of the two especially when working on may cut on thick materials and hardwoods such as hickory.

Band saws also accept wider blades. This means they will easily produce smoother or straighter cuts. However, their wide blades prevent them from being the ideal tools for tight curves but mot for the rip cuts.

The band saw uses the very long blade. The blade spins across two customized wheels and resembles a band. It is because of the blade’s design that the machine gets its name: the band saw.

Many band saws also come readily equipped with parts that allow them in rip cutting. In addition to that, they also provide a number of jigs for cutting arches, squares, circles, and many other shapes always.

However, a band saw won’t allow blades to be detached and later on reattached. Instead, band saws come in different types that are customized for various jobs too. Take a look at the most common type.

Best Benchtop Bandsaws are the most portable options. They come in smaller sizes. They are the right option for people with limited room to hold bigger band saws. They are high performing tools with the same capabilities as their bigger counterparts.

Stationary Band saws come with bigger motors. They work better than their smaller counterparts especially on hardwoods such as oak, teak, pecan, and mahogany.

When using the band saw, you’d have to first set the saw’s tension to suit the type of wood that you’re working on. When the tension is perfectly set and more specifically depending on the user’s manual, you’d then adjust the blade guard’s height to minimize wobbling. Blades come in many different sizes in thickness, length, and width.

We have a complete guideline about the best Band saw reviews, you can have a look.

Everyone needs a tool that is extra safe for their use. Comparing the Scroll Saw vs Band Saw safety tips will allow us to understand their safety more.

Looking at Scroll Saw vs Band Saw it is safe to say that both tools are extra safe for use. They don’t present any worry about “kickback” at any given time. Scroll saws also give rise to very little dust and will not affect your visibility.

The band saw has the very limited section of their blade exposed. This minimizes any chances of accidents and prevents anyone who is new from accidentally misusing the machine in whichever way.

Band saws also come with a huge blade guard that also double up as safety guards around the blade and easily prevents any contact between the machine and the user. This is important when the machine is actually running or working.

Scroll Saw vs Band Saw: Which One to Choose?

Like we have seen, it isn’t easy to write off any of these two tools as both are actually very reliable and extremely versatile

The band saw’s best selling point is actually the saw’s power. The power of the saw enables it to make deeper cuts through thicker materials. Because of this, it is much more suited for bigger projects as compared to the scroll saw. Thanks to its downward motion of operation that allows you to add thicker blades easily on the machine.

On the other hand, the scroll saw is known to offer very detailed and fine cuts, thanks to the saw’s pinhead like saw that allows it to easily follow patterns and give out clear-cut designs that you may need. However, the band saw blade is much better at cutting straighter lines because of its sturdier design.

While both tools are designed to cut out curves, every one of them serves a much more specific purpose. Therefore, before deciding which one to choose between the two, it’s important that you understand the type of work that you’d like to get on to.

Ask yourself: will I use my new woodwork saw to cut intricate details on my pieces such as ornaments? Or, do I want to go with bigger projects like curved furniture? With such project-based question in mind, what to choose between Scroll saw vs Band Saw will be extra easy and fast.

10 Must Have Power Tools Everyone Should Have!

Robert Patrick
Robert Patrick is the Chief Editor of Tools Adventure.He spent around 25 years in the construction and woodworking industry as a professional worker.Based on his experiences with the different type of tools; he is sharing his opinion about various tools so that a beginner can get started right away.Happy reading!