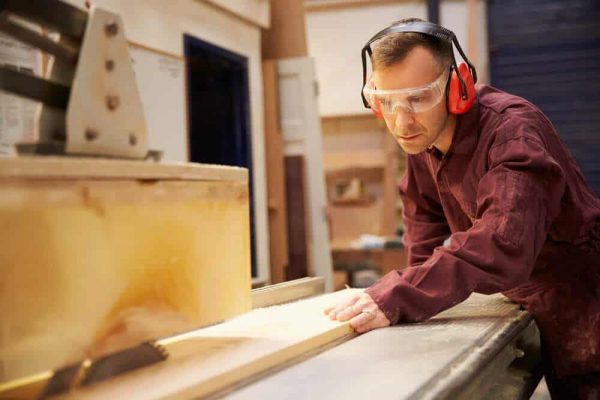 You will hardly find a job site that has no circular saw. This saw is so versatile such that most people will opt for it in case of a highly demanding job – and that’s no point of contention. However, since circular saw comes in either worm drive or sidewinder, most people still find it hard which circular saw model to go for.

In this post, we will help you to make the right choice. So if you are hard-pressed to choose between the worm drive and the sidewinder, take a look at what you should be aware of first before making that ultimate choice.

When the worm drive saw was designed, the motor was positioned behind the blade. This set up gave the saw a relatively high profile with a narrow touch. The same design has been maintained over the years.

Today the center line of the worm drive saw motor sits in a linear position with the handles. This gives that streamlined, narrow touch.

The narrow footing that the worm drive saw enjoys, therefore, gives the user easy access to confined or tight spaces.

The longer distance that exists between the handle and the saw blade also maximizes the reach of this circular saw, thus making it easy for use when looking for smooth cuts and the framing jobs, among other things.

However, for the sidewinder, the blade is set on the right and the motor on the left. As such, when you compare  worm drive vs sidewinder circular saw, you’ll realize that the sidewinder is rather thick around the middle.

With a worm drive, you will have a blade that is set on the left side. This means that you will be left with so much weight to the right. This is unlike the sidewinder that the blade is set on the right.

Due to the design of the worm-drive, you’ll install the blade of the worm drive differently from that of the sidewinder. You will also have an easy to follow the line of cut such as that of a track saw, and that’s where the track saw and the worm drive saw share a similarity.

This is unlike the use of a sidewinder on which the sight lines will be affected depending on your working habits (if you are a lefty or a righty). In the sidewinder, the cut line is rather hard to make out, and that’s why you have to make your cuts right on the stack.

However, this line of cut that the worm drive boasts of could as well be very dicey for someone that’s working on the sawhorses.Check the buying guideline of best saw horses .

Due to this design, many worm-drive circular saw users would either cut on top of the lumber stack or simply maximize on the weight of the worm drive saw and cut lumber boards while held in the hands.

In addition to that, there is the extra length that the worm drive circular tool comes with also makes it ideal for cutting a large stack of piles.

Thanks to the shape, that also makes the plunge cut really easy. However, the sidewinder is much of a lightweight option; as such, it is only suitable for working overhead.

So when it comes down to the use, the sidewinder is more comfortable to handle. Thanks to its blade position that also both your hands are kept at a safer distance from the main cutting blade.

Since the worm drive’s motor sits at the rear end of the saw, its power is usually transferred to the saw’s blade using two sets of gears.

These gears are oriented at the 90-degree angle. As such, the gear setup easily reduces the saw blade speed to almost 4,500 RPM. However, it increases the torque.

The position of the motor gives a more prolonged and more massive saw with more power than the lightweight sidewinder.

The worm drive circular also has come with larger gearing teeth, which offers better load-carrying ability than that of the sidewinder.

The worm drive circular saw also offer longer distance between right from its handle and to its blade. This extensive reach when making cuts is quite helpful for anyone who wants to make cross cuts on a sheet of wood.

This is unlike the sidewinder that hardly gives you the freedom of working on an extensive plane unless you have longer arms to compensate for the loss of the cutting length.

NOTE: The design of the worm drive saw gives it an orientation that places the overall weight of your circular saw over the main portion of material that the user intends to keep.

In doing so, it makes it easy for the user to stabilize their worm-drive saw during when they are making a cut on the lumber.

In comparing the worm drive vs sidewinder circular saws, the bottom line comes to tastes and preferences. It may also narrow down to how comfortable one is when using the saw. So whichever way you look at it, the truth is this; your choice depends on how you prefer to work and how comfortable you are when cutting.

So to understand which option to go with, you should try both saws. Whichever fits your needs will enable you to make a preferred choice. Luckily for you today, both saws are easy to find in online shops.

Jigsaw Vs Circular Saw│Which Should You Buy First?

How To Cut Plywood With A Circular Saw